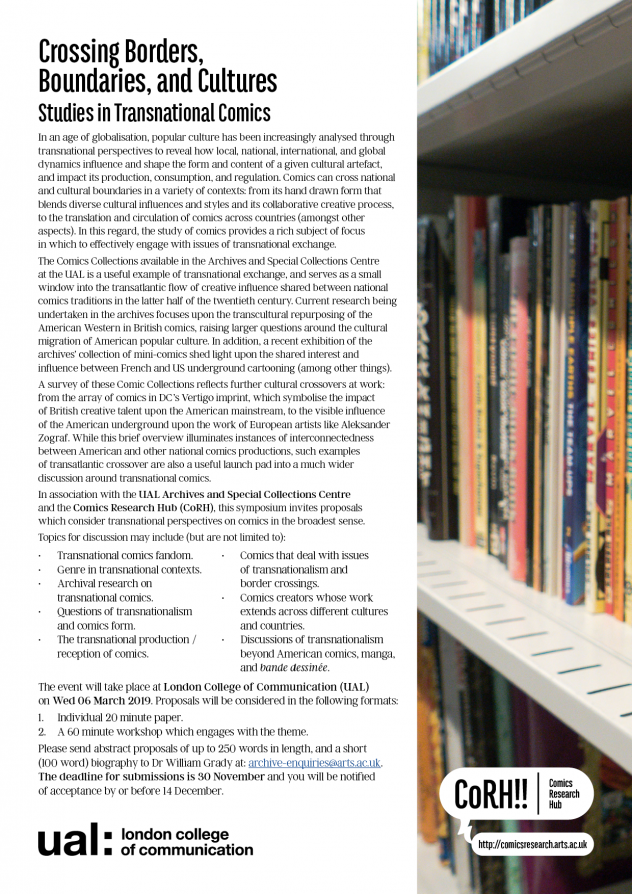 In an age of globalisation, popular culture has been increasingly analysed through transnational perspectives to reveal how local, national, international, and global dynamics influence and shape the form and content of a given cultural artefact, and impact its production, consumption, and regulation. Comics can cross national and cultural boundaries in a variety of contexts: from its hand drawn form that blends diverse cultural influences and styles and its collaborative creative process, to the translation and circulation of comics across countries (amongst other aspects). In this regard, the study of comics provides a rich subject of focus in which to effectively engage with issues of transnational exchange.

The Comics Collections available in the Archives and Special Collections Centre at UAL is a useful example of transnational exchange, and serves as a small window into the transatlantic flow of creative influence shared between national comics traditions in the latter half of the twentieth century. Current research being undertaken in the archives focuses upon the transcultural repurposing of the American Western in British comics, raising larger questions around the cultural migration of American popular culture. In addition, a recent exhibition of the archives’ collection of mini-comics shed light upon the shared interest and influence between French and US underground cartooning (among other things).

A survey of these Comic Collections reflects further cultural crossovers at work: from the array of comics in DC’s Vertigo imprint, which symbolise the impact of British creative talent upon the American mainstream, to the visible influence of the American underground upon the work of European artists like Aleksander Zograf. While this brief overview illuminates instances of interconnectedness between American and other national comics productions, such examples of transatlantic crossover are also a useful launch pad into a much wider discussion around transnational comics.

In association with the UAL Archives and Special Collections Centre and the Comics Research Hub (CoRH), this symposium invites proposals which consider transnational perspectives on comics in the broadest sense.

Topics for discussion may include (but are not limited to):

The event will take place at London College of Communication (UAL) on Wed 06 March 2019. Proposals will be considered in the following formats:

Please send abstract proposals of up to 250 words in length, and a short
(100 word) biography to Dr William Grady at: archive-enquiries@arts.ac.uk.
The deadline for submissions is 30 November and you will be notified of acceptance by or before 14 December.

0 comments on “Call for Papers: Crossing Borders, Boundaries and Cultures: Studies in Transnational Comics” Add yours →