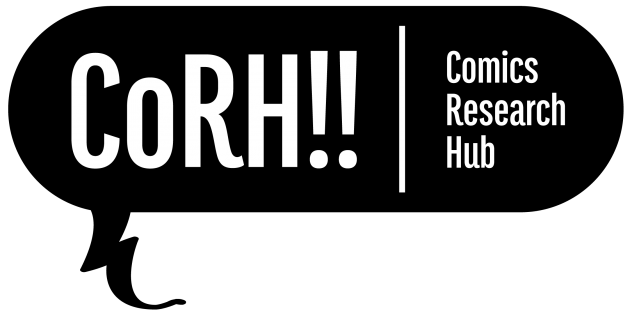 Funded by LCC’s Design School, the Comics Research Hub (CoRH) brings together world-leading academics from across the six colleges that make up UAL, and highlights the resources the university holds in its archives, as well as providing a context for the wealth of ongoing comics research at the university.

The hub’s launch is marked by an exhibition titled ‘Into/Out of the Box’ as part of LCC Design School’s show ‘Everything Happens So Much’ (15th of September until Wednesday 17th of October). This includes bookable sessions allowing you to examine comics from the university archives and to make your own Mini-Comics. The hub will also host a launch event at LCC on the 10th of October.

CoRH’s launch consolidates UAL’s leading position in UK comics research, with an impressive list of outputs from noted scholars, and a range of ongoing projects to roll out over the next few years.

Commenting on the hub’s launch Roger Sabin, Professor of Popular Culture at Central Saint Martins and a founding member of CoRH noted: ‘Comics Studies has reached a crucial phase in its development, halfway between a ‘field’ and a ‘discipline’; a little bit like Film Studies in the 1960s. I can think of no more exciting moment to launch a research hub, and no better place than the former home of Posy Simmonds, Brian Bolland, Sue Coe, Raymond Briggs and more.’

Find out more about the hub’s members, outputs and activities the newly launched website: http://comicsresearch.arts.ac.uk.