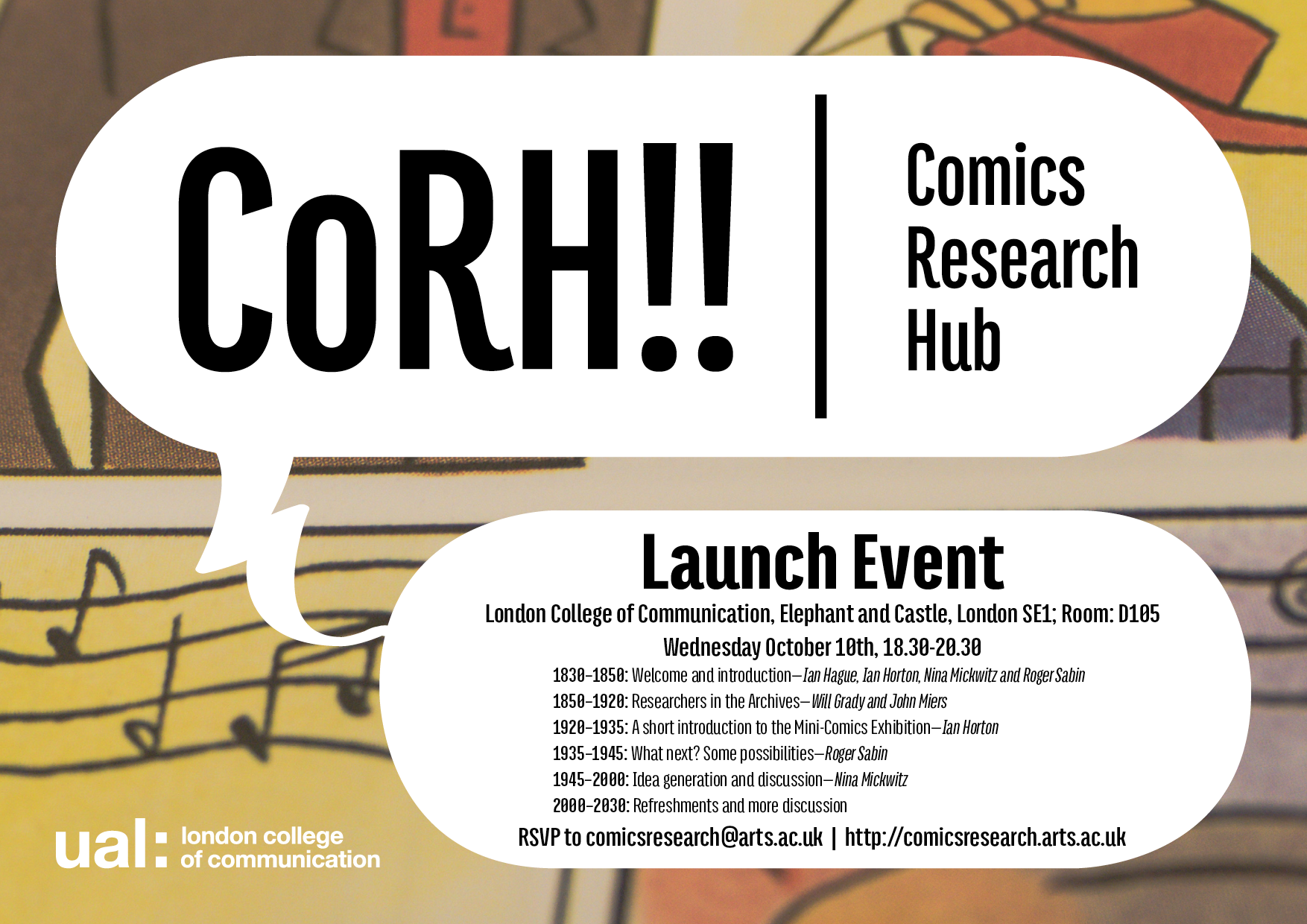 The Comics Research Hub had its inaugural meeting at a well-attended event that, judging by overheard discussions, comments and feedback was marked by a real buzz of excitement. As well as hub members, attendees included colleagues from UAL Archives and Special Collections, invited guests from the British Library and British Museum, Paul Gravett, Ernesto Priego of Comics Grid and other comics research colleagues from London universities – even a couple of Australian visitors: Dr Stuart Medley From Edith Cowan University, Perth and Bruce Mutard from Melbourne.

The evening began with a welcome from the founding team members. Special thanks was given in acknowledgement of the support for setting up the hub we have had from LCC Design School and LCC Research, and it was good to see both Pratap Rughani and Ellie Cameron-Smith there on the night. Ian Hague then spoke about the realisation that had lead up to this initiative – that UAL already has an impressive array of researchers working on comics, current staff and research students (not to mention an assortment of high profile alumni), working with and in comics. The main gist of this informal address was how, by bringing it together, the new Comics Research Hub offers a way to consolidate, support and afford such work better visibility. Demonstrating this point perfectly, presentations from the current Researchers in the Archive, Will Grady and John Miers, provided the highlights of the launch programme. Will introduced the early stages of his project by tracing the reemergence of colonialist narratives in cold war era Western comics unearthed in his forays into the UAL Archives. He also announced that a CFP for a conference (forthcoming in the spring) will be circulated soon. John’s talk followed with a fascinating glimpse of his practice-led engagement  in which he responds to graphic medicine-themed comics from the archive through his own drawing and comics practice. We will be following both of these projects with great interest.

Ian Horton spoke about the mini-comics exhibition ‘Into/Out of the Box’ (at the time of the launch still up at LCC) that he curated, in collaboration with John Miers and from the UAL Archives and Special Collections: Sarah Mahurter, Georgina Orgill and Robin Sampson. Ian made the point that the actual process of setting out and contextualising the comics according to the key organising principles of creation, distribution and reception made certain relationships and emphases visible, bringing about its own insights; the process of curation thus doubling its function as visual methodology.

Roger Sabin then opened up the question ‘Where next?’ to the room, and a range of different ideas were raised and discussed. Ideas that emerged through this latter part of the evening included interest in publication histories and a focus on comics publishing, another strong theme was the notion of decolonising comics studies. It comes as no surprise that questions about how comics practice sits within the remit of the Research Hub was another point of interest and debate. These will undoubtedly be ongoing discussions.

All in all the event was energetic and positive, and – as Will’s teaser suggested – there are other events in the pipeline. Perhaps the most important take-away at this point is the undeniable interest and enthusiasm for community building and developing connections around comics research at UAL. The Comics Research Hub has the potential to be a dynamic forum for our various initiatives and contributions to the field. Hopefully members will use it to promote their initiatives and events, and to get new collaborations off the ground.

CoRH membership is open to all current UAL staff and research students whose research or practice deals with comics or related forms. To apply for membership, please complete the CoRH Contact Form, and send it to comicsresearch@arts.ac.uk.

CoRH associate membership is open to all former UAL staff and research students whose research or practice deals with comics or related forms. To apply for membership, please complete the CoRH Contact Form, and send it to comicsresearch@arts.ac.uk.